Edgar Allan Poe. The Raven and other poems. 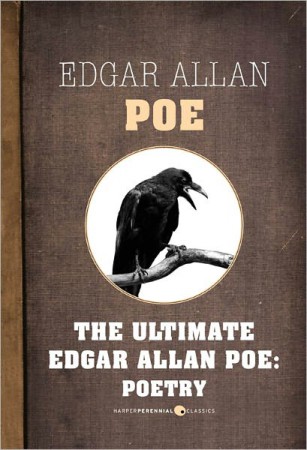 THE VALLEY OF THE UNREST

Once it smiled a silent dell Where the people did not dwell; They had gone unto the wars, Trusting to the mild-eyed stars, Nightly, from their azure towers, To keep watch above the flowers, In the midst of which all day The red sun-light lazily lay. Now each visitor shall confess The sad valley's restlessness. Nothing there is motionless -- Nothing save the airs that brood Over the magic solitude. Ah, by no wind are stirred those trees That palpitate like the chill seas Around the misty Hebrides! Ah, by no wind those clouds are driven That rustle through the unquiet Heaven Uneasily, from morn till even, Over the violets there that lie In myriad types of the human eye -- Over the lilies there that wave And weep above a nameless grave! They wave: -- from out their fragrant tops Eternal dews come down in drops. They weep: -- from off their delicate stems Perennial tears descend in gems.

In the greenest of our valleys     By good angels tenanted,  Once a fair and stately palace-     Radiant palace- reared its head.  In the monarch Thought's dominion-     It stood there!  Never seraph spread a pinion     Over fabric half so fair!  Banners yellow, glorious, golden,     On its roof did float and flow,  (This- all this- was in the olden     Time long ago,)  And every gentle air that dallied,     In that sweet day,  Along the ramparts plumed and pallid,     A winged odor went away.  Wanderers in that happy valley,     Through two luminous windows, saw  Spirits moving musically,     To a lute's well-tuned law,  Round about a throne where, sitting     ( Porphyrogene!)  In state his glory well-befitting,     The ruler of the realm was seen.  And all with pearl and ruby glowing     Was the fair palace door,  Through which came flowing, flowing, flowing,     And sparkling evermore,  A troop of Echoes, whose sweet duty     Was but to sing,  In voices of surpassing beauty,     The wit and wisdom of their king.  But evil things, in robes of sorrow,     Assailed the monarch's high estate.  (Ah, let us mourn!- for never morrow     Shall dawn upon him desolate!)  And round about his home the glory     That blushed and bloomed,  Is but a dim-remembered story     Of the old time entombed.  And travellers, now, within that valley,     Through the red-litten windows see  Vast forms, that move fantastically     To a discordant melody,  While, like a ghastly rapid river,     Through the pale door  A hideous throng rush out forever     And laugh- but smile no more.

At midnight, in the month of June,  I stand beneath the mystic moon.  An opiate vapor, dewy, dim,  Exhales from out her golden rim,  And, softly dripping, drop by drop,  Upon the quiet mountain top,  Steals drowsily and musically  Into the universal valley.  The rosemary nods upon the grave;  The lily lolls upon the wave;  Wrapping the fog about its breast,  The ruin molders into rest;  Looking like lethe, see! the lake
A conscious slumber seems to take,  And would not, for the world, awake.  All Beauty sleeps!- and lo! where lies  Irene, with her Destinies!

O, lady bright! can it be right-  This window open to the night?  The wanton airs, from the tree-top,  Laughingly through the lattice drop-  The bodiless airs, a wizard rout,  Flit through thy chamber in and out,  And wave the curtain canopy  So fitfully- so fearfully-  Above the closed and fringed lid  'Neath which thy slumb'ring soul lies hid,  That, o'er the floor and down the wall,  Like ghosts the shadows rise and fall!  Oh, lady dear, hast thou no fear?  Why and what art thou dreaming here?  Sure thou art come O'er far-off seas,  A wonder to these garden trees!  Strange is thy pallor! strange thy dress,  Strange, above all, thy length of tress,  And this all solemn silentness!  The lady sleeps! Oh, may her sleep,  Which is enduring, so be deep!  Heaven have her in its sacred keep!  This chamber changed for one more holy,  This bed for one more melancholy,  I pray to God that she may lie  For ever with unopened eye,  While the pale sheeted ghosts go by!  My love, she sleeps! Oh, may her sleep  As it is lasting, so be deep!  Soft may the worms about her creep!  Far in the forest, dim and old,  For her may some tall vault unfold-  Some vault that oft has flung its black  And winged panels fluttering back,  Triumphant, o'er the crested palls,  Of her grand family funerals-  Some sepulchre, remote, alone,
Against whose portal she hath thrown,
In childhood, many an idle stone-  Some tomb from out whose sounding door  She ne'er shall force an echo more,  Thrilling to think, poor child of sin!  It was the dead who groaned within.

A DREAM WITHIN A DREAM

Take this kiss upon the brow! And, in parting from you now, Thus much let me avow -- You are not wrong, who deem That my days have been a dream; Yet if hope has flown away In a night, or in a day, In a vision, or in none, Is it therefore the less gone? All that we see or seem Is but a dream within a dream. I stand amid the roar Of a surf-tormented shore, And I hold within my hand Grains of the golden sand -- How few! yet how they creep Through my fingers to the deep, While I weep -- while I weep! O God! can I not grasp Them with a tighter clasp? O God! can I not save One from the pitiless wave? Is all that we see or seem But a dream within a dream?