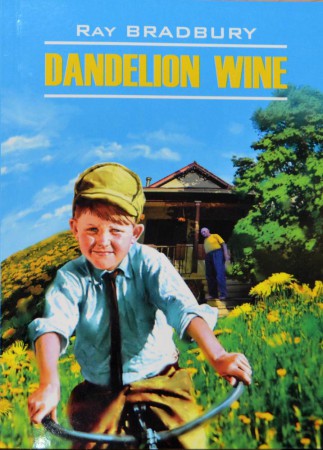 It was a quiet morning, the town covered over with darkness and at ease in bed. Summer gathered in the weather, the wind had the proper touch, the breathing of the world was long and warm and slow. You had only to rise, lean from your window, and know that this indeed was the first real time of freedom and living, this was the first morning of summer.

Douglas Spaulding, twelve, freshly wakened, let summer idle him on its early-morning stream. Lying in his third-story cupola bedroom, he felt the tall power it gave him, riding high in the June wind, the grandest tower in town. At night, when the trees washed together, he flashed his gaze like a beacon from this lighthouse in all directions over swarming seas of elm and oak and maple. Now . . .

A whole summer ahead to cross off the calendar, day by day. Like the goddess Siva in the travel books, he saw his hands jump everywhere, pluck sour apples, peaches, and midnight plums. He would be clothed in trees and bushes and rivers. He would freeze, gladly, in the hoarfrosted icehouse door. He would bake, happily, with ten thousand chickens, in Grandma’s kitchen.

But now—a familiar task awaited him.

One night each week he was allowed to leave his father, his mother, and his younger brother Tom asleep in their small house next door and run here, up the dark spiral stairs to his grandparents’ cupola, and in this sorcerer’s tower sleep with thunders and visions, to wake before the crystal jingle of milk bottles and perform his ritual magic.

He stood at the open window in the dark, took a deep breath and exhaled.

The street lights, like candles on a black cake, went out. He exhaled again and again and the stars began to vanish.

Douglas smiled. He pointed a finger.

Yellow squares were cut in the dim morning earth as house lights winked slowly on. A sprinkle of windows came suddenly alight miles off in dawn country.

“Everyone yawn. Everyone up.”

The great house stirred below.

“Grandpa, get your teeth from the water glass!” He waited a decent interval. “Grandma and Great-grandma, fry hot cakes!”

The warm scent of fried batter rose in the drafty halls to stir the boarders, the aunts, the uncles, the visiting cousins, in their rooms.

“Street where all the Old People live, wake up! Miss Helen Loomis, Colonel Freeleigh, Miss Bentley! Cough, get up, take pills, move around! Mr. Jonas, hitch up your horse, get your junk wagon out and around!”

The bleak mansions across the town ravine opened baleful dragon eyes. Soon, in the morning avenues below, two old women would glide their electric Green Machine, waving at all the dogs. “Mr. Tridden, run to the carbarn!” Soon, scattering hot blue sparks above it, the town trolley would sail the rivering brick streets.

Clock alarms tinkled faintly. The courthouse clock boomed. Birds leaped from trees like a net thrown by his hand, singing. Douglas, conducting an orchestra, pointed to the eastern sky.

The sun began to rise.

He folded his arms and smiled a magician’s smile. Yes, sir, he thought, everyone jumps, everyone runs when I yell. It’ll be a fine season. He gave the town a last snap of his fingers.

Crossing the lawn that morning, Douglas Spaulding broke a spider web with his face. A single invisible line on the air touched his brow and snapped without a sound.

So, with the subtlest of incidents, he knew that this day was going to be different. It would be different also, because, as his father explained, driving Douglas and his ten-year-old brother Tom out of town toward the country, there were some days compounded completely of odor, nothing but the world blowing in one nostril and out the other. And some days, he went on, were days of hearing every trump and trill of the universe. Some days were good for tasting and some for touching. And some days were good for all the senses at once. This day now, he nodded, smelled as if a great and nameless orchard had grown up overnight beyond the hills to fill the entire visible land with its warm freshness. The air felt like rain, but there were no clouds. Momentarily, a stranger might laugh off in the woods, but there was silence . . .

Douglas watched the traveling land. He smelled no orchards and sensed no rain, for without apple trees or clouds he knew neither could exist. And as for that stranger laughing deep in the woods . . . ?

Yet the fact remained—Douglas shivered—this, without reason, was a special day.

The car stopped at the very center of the quiet forest.

They had been jostling elbows.

They climbed out, carrying the blue tin pails away from the lonely dirt road into the smell of fallen rain.

“You’re off a million miles,” said Father. “Look alive. Walk with us.”

And they walked through the forest, Father very tall, Douglas moving in his shadow, and Tom, very small, trotting in his brother’s shade. They came to a little rise and looked ahead. Here, here, did they see? Father pointed. Here was where the big summer-quiet winds lived and passed in the green depths, like ghost whales, unseen.

Douglas looked quickly, saw nothing, and felt put upon by his father who, like Grandpa, lived on riddles. But . . .But, still . . .Douglas paused and listened.

Yes, something’s going to happen, he thought, I know it!

“Here’s maidenhair fern,” Dad walked, the tin pail belling in his fist. “Feel this?” He scuffed the earth. “A million years of good rich leafmold laid down. Think of the autumns that got by to make this.”

Douglas felt but did not feel the deep loam, listening, watchful. We’re surrounded! he thought. It’ll happen! What? He stopped. Come out, wherever you are, whatever you are! he cried silently.

Tom and Dad strolled on the hushed earth ahead.

And he was gesturing up through the trees above to show them how it was woven across the sky or how the sky was woven into the trees, he wasn’t sure which. But there it was, he smiled, and the weaving went on, green and blue, if you watched and saw the forest shift its humming loom. Dad stood comfortably saying this and that, the words easy in his mouth. He made it easier by laughing at his own declarations just so often. He liked to listen to the silence, he said, if silence could be listened to, for, he went on, in that silence you could hear wildflower pollen sifting down the bee-fried air, by God, the bee-fried air! Listen! the waterfall of birdsong beyond those trees!

Now, thought Douglas, here it comes! Running! I don’t see it! Running! Almost on me!

But Tom and Dad bent down to shove their hands deep in rattling bush. The spell was shattered. The terrible prowler, the magnificent runner, the leaper, the shaker of souls, vanished.

Douglas, lost and empty, fell to his knees. He saw his fingers sink through green shadow and come forth stained with such color that it seemed he had somehow cut the forest and delved his hand in the open wound.

With buckets half burdened with fox grapes and wild strawberries, followed by bees which were, no more, no less, said Father, the world humming under its breath, they sat on a green-mossed log, chewing sandwiches and trying to listen to the forest the same way Father did. Douglas felt Dad watching him, quietly amused. Dad started to say something that had crossed his mind, but instead tried another bite of sandwich and mused over it.

“Sandwich outdoors isn’t a sandwich anymore. Tastes different than indoors, notice? Got more spice. Tastes like mint and pinesap. Does wonders for the appetite.”

Douglas’s tongue hesitated on the texture of bread and deviled ham. No . . .no . . .it was just a sandwich.

Tom chewed and nodded. “Know just what you mean, Dad!”

It almost happened, thought Douglas. Whatever it was it was Big, my gosh, it was Big! Something scared it off. Where is it now? Back of that bush! No, behind me! No here . . .almost here . . .He kneeded his stomach secretly.

If I wait, it’ll come back. It won’t hurt; somehow I know it’s not here to hurt me. What then? What? What?

“You know how many baseball games we played this year, last year, year before?” said Tom, apropos of nothing. Douglas watched Tom’s quickly moving lips.

“Wrote it down! One thousand five hundred sixty-eight games! How many times I brushed my teeth in ten years? Six thousand! Washing my hands: fifteen thousand. Slept: four thousand some-odd times, not counting naps. Ate six hundred peaches, eight hundred apples. Pears: two hundred. I’m not hot for pears. Name a thing, I got the statistics! Runs to the billion millions, things I done, add ’em up, in ten years.”

Now, thought Douglas, it’s coming close again. Why? Tom talking? But why Tom? Tom chatting along, mouth crammed with sandwich, Dad there, alert as a mountain cat on the log, and Tom letting the words rise like quick soda bubbles in his mouth:

“Books I read: four hundred. Matinees I seen: forty Buck Joneses, thirty Jack Hoxies, forty-five Tom Mixes, thirty-nine Hoot Gibsons, one hundred and ninety-two single and separate Felix-the-Cat cartoons, ten Douglas Fairbankses, eight repeats on Lon Chaney in The Phantom of the Opera, four Milton Sillses, and one Adolph Menjou thing about love where I spent ninety hours in the theater toilet waiting for the mush to be over so I could see The Cat and the Canary or The Bat, where everybody held onto everybody else and screamed for two hours without letting go. During that time I figure four hundred lollipops, three hundred Tootsie Rolls, seven hundred ice-cream cones . . .

Tom rolled quietly along his way for another five minutes and then Dad said, “How many berries you picked so far, Tom?”

Dad laughed and lunch was over and they moved again into the shadows to find fox grapes and the tiny wild strawberries, bent down, all three of them, hands coming and going, the pails getting heavy, and Douglas holding his breath, thinking, Yes, yes, it’s near again! Breathing on my neck, almost! Don’t look! Work. Just pick, fill up the pail. If you look you’ll scare it off. Don’t lose it this time! But how do you bring it around here where you can see it, stare it right in the eye? How? How?

“Got a snowflake in a matchbox,” said Tom, smiling at the wine-glove on his hand.

Shut up! Douglas wanted to yell. But no, the yell would scare the echoes, and run the Thing away!

And, wait . . . the more Tom talked, the closer the great Thing came, it wasn’t scared of Tom, Tom drew it with his breath, Tom was part of it!

Read to the end:  knigger.org/bradbury/Dandelion_Wine/lang/en/